An essay by Abdullah Mohammed on #Caribbean #SIDS, #SMEs, and the need for Political Leadership in Innovation… or we’re doomed.

The SIDS Challenges, and how to manage out of them

Most Caribbean countries are small island developing states (SIDS), which are unique forms of small developing economies. They are plagued by a myriad of challenges, such as having limited factor endowments, being especially prone and vulnerable to environmental disasters, having turbulent political economies, small domestic markets characterized by heavy reliance on narrow, price-setting export markets, and a dependence on the import of foreign goods and services.

Their situation is compounded as they face a series of size-related macro challenges, such as sub-optimal economic diversification, education challenges, a paucity of leadership and innovation, and problems with governance, corruption, and administration (Briguglio 2003; Turvey 2007; Auty 2016).

Singapore’s GDP per capita is 11 times that of Jamaica, even though it’s 7 times smaller.
Not all of them are in dire straits though. Some small island economies are actually doing quite well, and are no longer developing. That should be good news for the rest of us. Perhaps their formula for success is repeatable.

There is empirical evidence showing that smaller economies, despite their size and economic constraints, ceteris paribus, are able to manage their way out of hardships, and move on to growth and prosperity, becoming globally competitive, and in some specific examples, highly admired. The oft-cited example of this is of course Singapore, which gained its independence from Britain in 1965. Under the leadership of Lee Kuan Yew and his successors, Singapore moved from what was once a so-called third-world economy in the 1960’s, to what is now the third most competitive economy in the world (Lee 2000; World Economic Forum 2017).

Interestingly, Singapore’s 2016 GDP per capita (US$52,600) is roughly three times the size of resource-rich Trinidad and Tobago (at US$15,786), and fully eleven times that of Jamaica (at US$4,796), despite Singapore being fifteen and seven times smaller in size geographically than Jamaica and Trinidad and Tobago, respectively (refer to Figure 1, below).

He compared the successes of Mauritius, a SIDS low on factor endowments, which diversified its economy early in its history, with Trinidad and Tobago, a SIDS endowed with large oil and gas reserves, but plagued with a dependence on high economic rents on oil and gas, and stymied diversification, and, ultimately, the fragility of the resultant economy. #DutchDisease #ResourceCurse? Clearly.

A sustainable economic outcome then is a function of Government Policy, regardless of whether the economy is resource-challenged, as in the case of Mauritius, and many Caribbean island economies, resource-rich, or resource-cursed, as in the case of Trinidad and Tobago with its oil and (now gone) sugar industries. (Papyrakis 2017).

Government Policy determines what is done with State funds now, to ensure a sustainable future when the key resource is depleted and extraction becomes uneconomical. While it seems that this is straightforward common-sense, we know that implementation is never as simple as it seems, and strong political will and tough decisions are sometimes needed sooner, rather than later (Auty 2016).

SMEs and the Innovation-driven destination 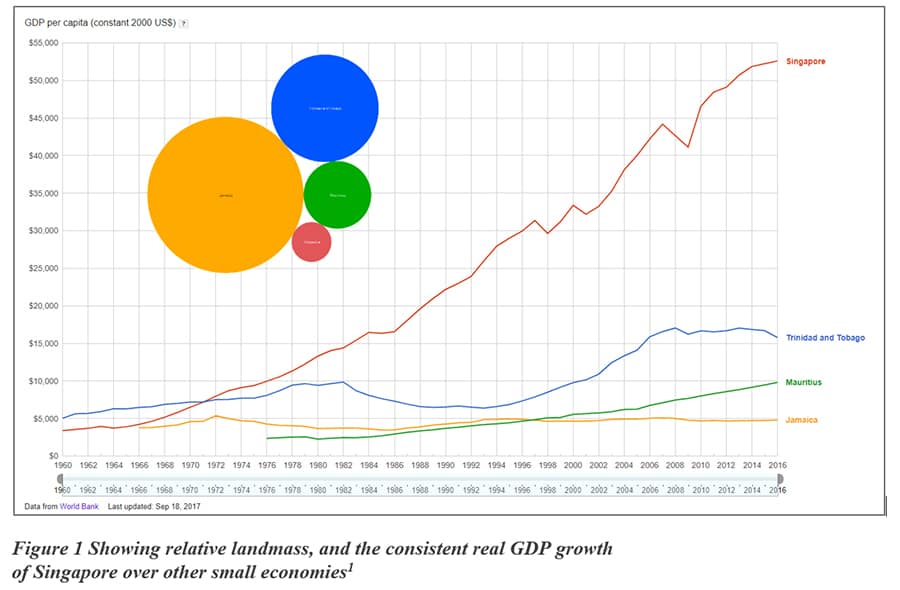 Much like the small economy, growth and success of the small firm is acutely challenging due to its smaller size and limited resources. These factors make it more vulnerable to globalization effects and domestic market dynamics, a situation worsened by characteristics such as limited or no accesses to venture capital and other startup resources, lack of managerial talent (particularly with regards to technology, financial skill and exporting experience), and a general inability to benefit from economies of scope and scale.

Even worse, the success and growth of smaller entrepreneurial firms finding themselves situate in small island economies such as Caribbean economies, or economies which are predominantly factor-driven economies, may find themselves further stunted by external factors, such as smaller local markets with less purchasing power, and fewer lines of State-supported entrepreneurial development initiatives.

And while the light-touch approach to State intervention is arguably preferred, the role of the State is magnified in smaller economies, necessitating a reexamination of that assumption. The State here is the prime mover, and plays a critical role in providing the right climate for attracting much-needed FDI, overall SME growth, and competitive SME internationalization (Wint 2003).

And so after pointing fingers squarely at the State, the next step in the “SME-growth in smaller economies” discourse, is broaching the topic of the economic staged-growth model. The World Economic Forum (WEF) uses the factor-driven, efficiency-driven, innovation-driven stage model to describe the predominant focus of an economy (World Economic Forum 2017).

This model (at Appendix 1) is predicated on the Schumpeterian argument that innovation trumps market efficiency (Adam Smith’s Invisible Hand), and so there is the need to shape the economy to become more innovation-driven to increase its global competitiveness. The recent WEF report heightens the need for innovation in economies, as technology becomes more and more disruptive.

It argues that the global economy is at the cusp of the 4th Industrial Revolution (4IR) as the world move towards cyber-physical systems; the resultant opportunities for growth (using leapfrogging) are ripe for the taking; the Report encourages smaller players to “disrupt the status quo”, and for economies to create innovation centres and hubs. 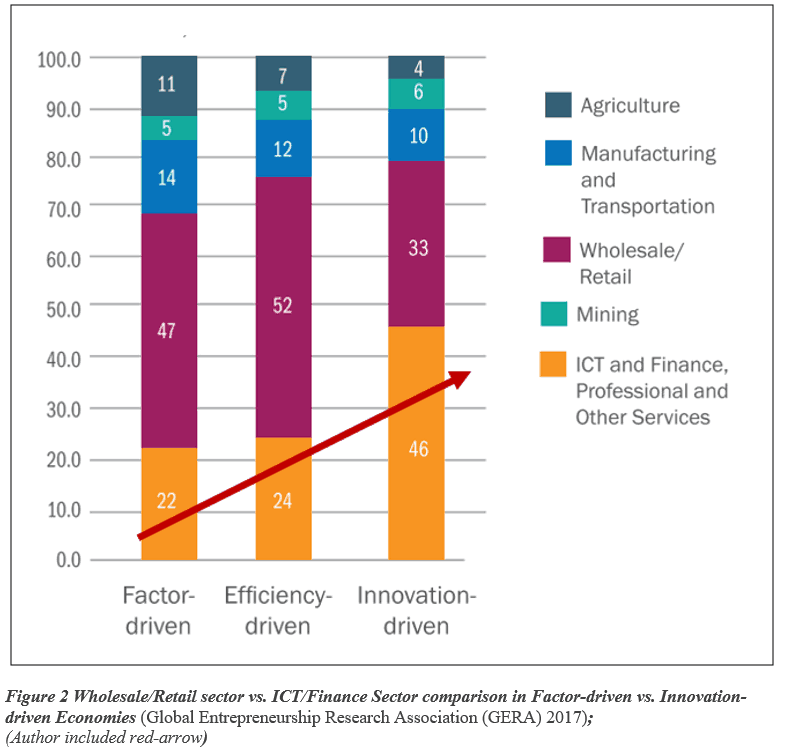 The recent GEM Report (Global Entrepreneurship Research Association (GERA) 2017) clearly illustrates the need for the State and SMEs to move aware from traditional manufacturing and domestic trade, towards innovating service-oriented industries such as ICT, Finance and other professional services (see red-arrow in Figure 2 below).

Foreign Direct Investments (FDI), the use of Information and Communication Technologies (ICTs), particularly by SMEs, enterprise research and development spending, and adoption of industrial hubs or clustering.

Unfortunately, they reported finding lackluster FDI with limited innovation spillovers, ICTs being used mainly for consumption and not for efficiency or innovation (a situation found acutely with SMEs), limited research and development in larger enterprises, and a general lack of leadership in directing coherent innovation strategy, both domestically and regionally. These all point to a lack of leadership, direction and political will to reshape these economies into innovation-driven economies, a finding that does not bode well for the future.

Funding SME Growth is not enough, and the need for “Born-Innovators”

An economy has to be really badly off though, not to have a few companies and industries doing well. However there is a tipping point for the economy. Bijaoui (2017) argues that despite the developmental stage the country is in, you will generally find SMEs at different stages themselves.

This is a research-university driven, cluster-based (almost democratized/crowd-sourced) approach for firm innovation, based on the Silicon Valley and Shenzhen Models[1] for clustered innovation, with clear targets and objectives. (Embedding the Shenzhen Documentary below). Born-innovators would drive an economy forward, creating several offshoot, niche markets both locally and regionally.

Concluding with a corollary to an old adage, and Policy implications

To be clear, the argument being put forward is not that fostering entrepreneurship and SME formalization in the economy is not important. Quite the contrary: entrepreneurship fuels the economy through investment, job growth and innovation. Smaller firms increase the velocity of money and act as a buffer during times of economic shocks.

But like Herzberg’s motivation theory, these are necessary “hygiene factors” for development, but may not necessarily be growth motivators. Leaving firms to innovate on their own without incentivizing them accordingly may lead to situations where risk-averse firms are predominantly rent-seeking, and not innovation-seeking, as is the case with Trinidad and Tobago, where even the firms in a thriving financial sector are stoically risk-averse and rent-seeking.

This does very little in moving the economy from a factor-driven or efficiency-driven economy to an innovation-driven, competitive economy. The WEF innovation metrics for Caribbean economies speak for themselves: for example, on a scale reaching seven (7), Trinidad and Tobago stands at a very low 3.0, and Jamaica at a slightly higher 3.4 (refer to Figure 3, below). 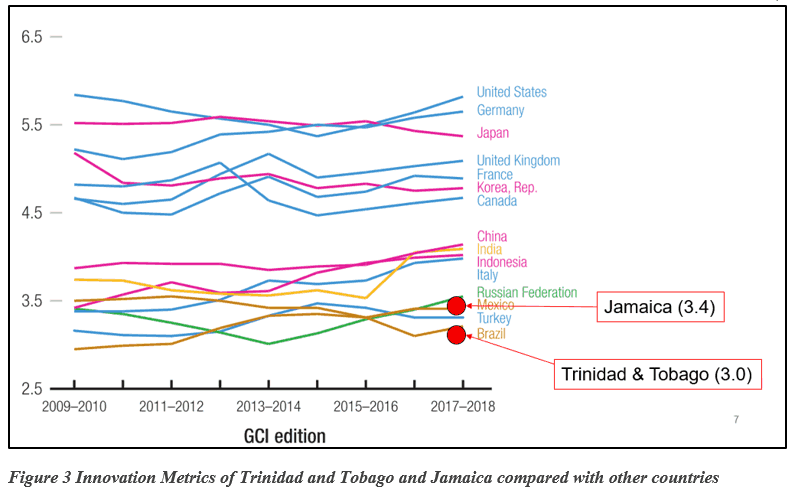 While not losing sight of the macroeconomic fundamentals (economic stability, etc.), the State in these economies, must lead the effort in incentivizing and promoting technology-based research and innovation within their economies, if any long-term sustainable growth is to be achieved.

Policies and strategies need to be aggressive, clear and coherent, and must build on the strengths of the individual country, its institutions (such as the University of the West Indies, CARIRI, etc.), its resources, and its people.

What’s more, these activities should be aimed at moving specific innovation metrics upwards, such as those used by the WEF (Appendix 1), and the GEM. For example, regarding improving innovation, the Caribbean Development Bank (2017) recommends incentivizing R&D and innovation through regional cluster development and institutional strengthening, maximizing the educational capacity of the workforce, engaging the diaspora, and strengthening the regulatory framework around the innovation systems (intellectual property, tax incentives, etc.).

No island is “an island” either
No man is an island, and in today’s interdependent global economy, no island is an island either. The momentum for growth in technology and its disruptive capacity, coupled with the vagaries of international trade and oil-/energy-related shocks does not leave the State much time for inaction either.

For smaller economies to move beyond mere survival and towards global competitiveness, that State must move smaller firms towards innovation-driven business efficiency, by creating the right ecosystem for market-relevant innovation, and by encouraging so-called “born innovators”.

Or, perhaps you need to establish institute for aquaculture research and development in a domestic university, set up an aquaculture industry cluster with financial incentives for market-ready innovations and legal intellectual property/patent protections, develop export-market aquaculture information systems and trade links, and finally give him a grant to start the world-class, high quality fish farm.

If we are only teaching our firms to fish, they have very little incentive to move beyond factor extraction and rent-seeking, other than perhaps on to operational efficiency to reduce costs as the firm grows larger. Business sophistication and innovation will very rarely arise, except in unique circumstances, such as where the export market demands it.

Caribbean smaller firms, and their economies no long have the luxury of waiting, and the State must, through leadership, aggressively incentivise the push for across-the-board innovation-orientation. 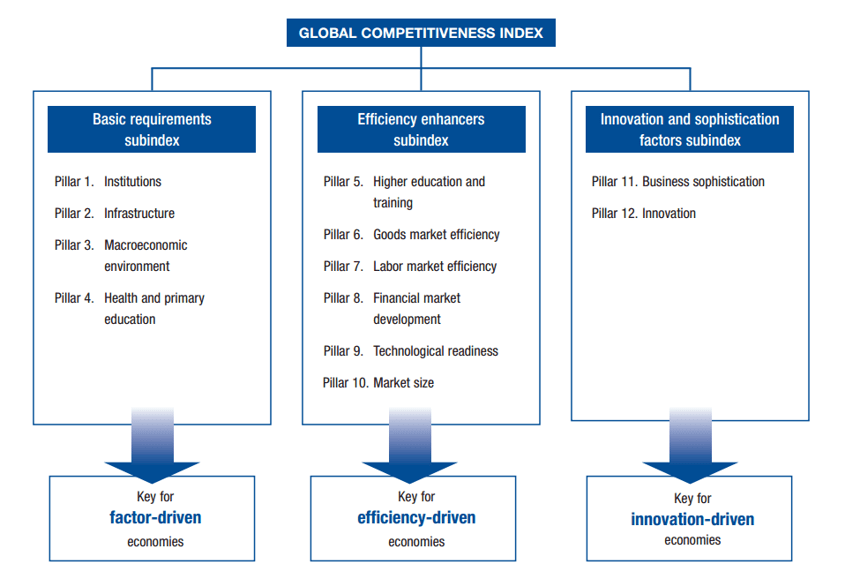 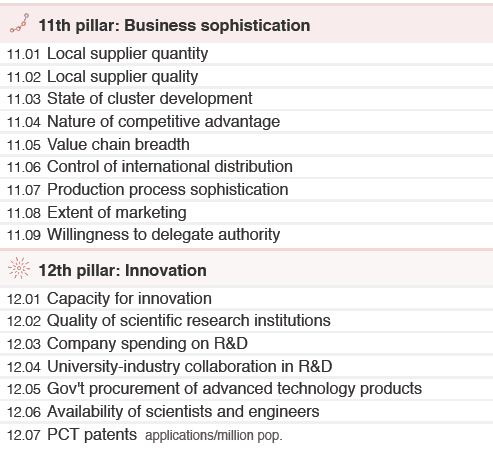 A business and IT professional, with a passion for technology, change, start-ups and graphs. Abdullah has over 15 years working in the various fields including Software Engineering and Development, Business & Entrepreneurship, IT Project Management, Training & Development, Data Science, and Internal Auditing. He has facilitated numerous courses on Project Management, Controls and Governance. He has also authored the textbook Introduction to Practical Project Management Fundamentals using Microsoft Project.

His research interests include…