Results from a worldwide internet speed test conducted in May of 2019 reveal that Trinidad and Tobago finished 51st out of the 178 countries that participated. The test measured both the upload speed and download speed in Mb per second of fixed broadband in each country.

How T&T Matches Up in the Region

Despite a strong finish in the international rankings, Trinidad and Tobago was actually not the fastest country from the Caribbean. That title belongs to Barbados, who, with a blazing download speed of 89.18 megabytes per second, ranked 24th in the world. Adversely, the slowest country of the region was Cuba, with a sluggish download speed of just 8.7 megabytes per second.

Part of the reason for the significant increase in internet speed in T&T and other Caribbean countries was the implementation of a 4G network in the region. 4G is a wireless broadband technology that allows high-speed mobile data uploads and downloads, up to 70 times faster than before. Perhaps, the region can experience an even greater boost upon the implementation of 5G in the near future. 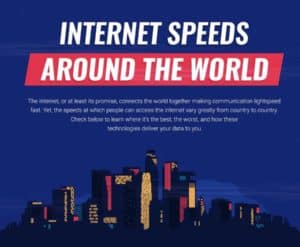 How the Caribbean Matches Up with the World

Looking beyond the Caribbean, click to review the infographic at left by GPU Nerds to see how countries around the world fared in the most up to date internet speed test.The graphic will appear at full size. Right click to save to your computer.